Working on an interesting project. We received a two-circuit or non-redundant RSW system that just wasn’t doing what the ship’s engineer wanted. They had two chillers but only one condenser, one compressor, one receiver, and one ineffective control system. Having only single components powering two separate chillers can cause the system to under-perform, and if one of these single pieces needs service the entire RSW system goes down. Not good in the middle of fishing season. 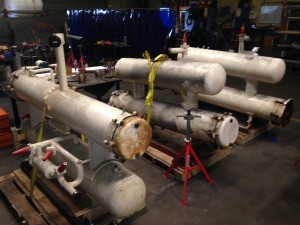 Our goal is to create two complete separate systems running from a single control panel. The equipment was brought to our shop- the above photo shows the three main components, obviously in need of some attention. If you are running a boat with a similar two-circuit system, you might consider upgrading so a minor breakdowns doesn’t leave you stuck in port at the peak of the season. Contact us today to find out more. 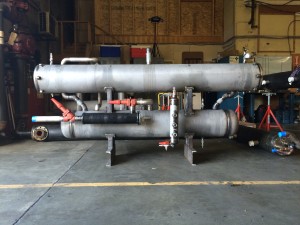 We just finished fabricating the new condenser unit, shown in the second photo. We stripped down and sandblasted the existing equipment. After changing some fittings and doing some other work we will send all the units out for painting. Then it will be on to installation, wiring the controls, and start up. These new systems will be more efficient, work independently of each other, and will keep this captain’s catch chilled to perfection.